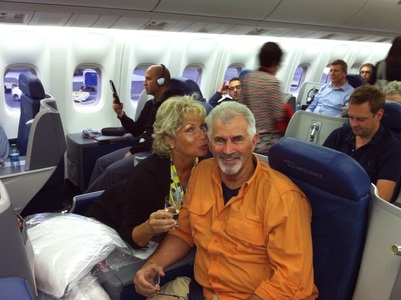 Happy 35th Wedding Anniversary to us – let’s get this party started!

Funny Things that Happened on the way to Europe

First there was this whole dialogue about the impracticality of traveling with linen clothes, starting with the day husband finally did some pre-cruise shopping which was, no joke, one week before the trip.  He politely (or was it emphatically?) declined my offer to accompany him saying he does better as a solo act in a store, which I do know to be true about him.  So, off he went, returning about 30 minutes later with, among other things, a white linen jacket.

Me to him:  “What?  Linen?  White?  Linen? Seriously?  Have you heard nothing I’ve ever mentioned before about the impracticality of that stuff?”

“White honey, really?  What happens when you spill something?”

“And how often does that happen, dear?  I’m not exactly one of the kids you know.”

Pause while he quickly slips it on proving (or was he flaunting?) that a person can, in fact, buy something off the rack that fits, well, spectacularly.  Men!  And damn if he didn’t look really, really good in that white linen jacket.  In fact, I was just a little more than jealous, I was downright envious.  If he can travel with linen, so can I! The ‘travel Gods’ had spoken and granted us adults permission to travel with linen.  And, thus the race was on for both of us to see who could buy the most pieces of impractical-but-ever-so-cruise-worthy linen in the final days before departure.  Game on, husband.

But in the end, the ‘must travel sensibly’ mantra won, at least for me, and I was the proud owner of one great pale blue set of linen pants with matching shirt and he went with, let’s see, multiple linen shirts, shorts, and pants, plus that gorgeous white linen jacket.  But I did have to admit he looked great in each and every piece, and as an aside we never once had to spot clean any of it.  Go figure.  I guess adults really can act their age (or maybe we were just avoiding any messy dishes with marinara sauce while wearing the linen?).  Plus, those great linen shopping sprees also proved to be good conversation pieces for us with our kids, who could not believe that their mother had finally caved and allowed anyone in the family to purchase linen.

Sigh.  Yes, even me, and you know what?  Now I love all that dang linen!

Once the linen caper was over, then came the compression socks.  Not just any.  These were knee length, and mine were white, a final travel gift from husband.

“You’ll need them on those long flights; helps to guard against thrombosis. Try ‘em.”

“Uh, okay” says I with a huge smile, and then I couldn’t stop laughing as I tried to stretch and pull and tug them on.  I felt like Drizella, Cinderella’s sister as she tried to squeeze her big foot into the too-small glass slipper.  These things are seriously tight, and it was comical to the point that I couldn’t imagine being able to put them on while in flight and not cause a whole lot of attention to my hysterical laughter while doing so.

“Hey, what’s all that commotion up in Seat 5A?”

“Oh, it’s just a crazy lady giggling while she puts on her silly compression socks!”

Unfortunately, husband wasn’t so amused.  He got a little defensive and thought I was being overly dramatic.  “You’ll thank me for this,” and dang, if that prediction didn’t also come true.  So, between the linen lark and the compression sock antics at least one of us was giddy by departure day.

And thanks to the prior day’s marathon packing session there was very little to do on this morning other than stay the course and batten down the hatches.  Seeking some personal silence as well as one last little bit of leg stretching (sans compression socks) before the long crossing ‘over the pond,’ I rose early and took a brief peaceful walk around the neighborhood.  It’s funny how departures like this get you to thinking about all sorts of things like will anything change here while I’m gone, or is it just that I’m hopeful that something will change while I’m gone?

Sparing no expense (we were traveling with linen clothes!), we had arranged for a car to pick us up and deliver us to the airport, and Louis, our driver was right on time.  Perfect start to our big adventure.  That is, until we got to the airport and proceeded to check in.  Weather was already wreaking havoc on the day’s flight schedules, but the Delta agent quickly suggested we ditch our initial flight and take an earlier one which we agreed to just to get us in motion and out of town.  The kicker was that the new flight took us into La Guardia (NYC) instead of JFK airport which is where our overseas flight was departing from. And this also meant we had to shuttle between the two of them running cross town through New York City.  Cha-ching! That was the sound of the taxi’s meter adding more expense to this trip – before we even left home base.  Oh well.

Being experienced travelers, this itinerary alteration did not deter us at all; in fact it was more of a challenge.  Within minutes after the ticketing deed was done we were already comfortably enjoying the amenities of the Delta Crown Room at Orlando International Airport.

“Ah yes, a Jack at noon in the Delta Crown Room.  How sweet it is!”

After making the first of many adult-beverage-clinking toasts along this journey, we reviewed the new itinerary and game plan, then settled in for the ride.  And at this point I must admit, by the time we boarded (yes, first class, baby!) even these two world travelers were excited.  The new upgraded plush seating configurations in our Delta Airbus were better than I imagined, and for once even airplane champagne tasted oh so good.

Then came the pre-lunch wine.  Why yes, thanks! Go ahead and pamper me if you must.

Two heavenly hours later we landed at LGA and I went to stand in the endless taxi line while hubby waited on our bags, which came almost simultaneously with the end of my turn in that extensive queue. Finally tucked into the NY cab, phase two of “yes we are leaving the USA today” started rolling along with his meter until over an hour had passed when we arrived at JFK, you know the place we should have already landed at earlier in the day?  Anyway, quick check in of our bags and we still had time to go enjoy the just-opened-last-week new Delta Sky Club Lounge with outdoor Sky Deck at terminal T4.  Yes, we felt we had won the lottery.  Our taxi made it in time and delivered us safely; then Delta gave us another wink and nod by putting us in this newly-opened world class international terminal so we could enjoy their stylish, very tech savvy lounge that was only one week old.  Even though I know better, I like to think that Delta did this on purpose as their way of thanking us for 35 years of traveling with them.  (But, I’m pretty sure I know better.) And even though it was a bit cheesy, we did take a couple of pictures in the Sky Club lounge and sent them off with immediate texts to our jet-setting kids. “That’s right, mom and dad got here before either of you!”  Was that the wine talking silly already?  Why yes, it probably was.

YES!  We gathered our stuff, err, ‘personal belongings’, and made our way to the gate.  BINGO.  Husband scored again with fantastic upgraded seating, only this time we got to experience the new flat- bed seats on DL’s 767-300 series that provided incredible leg room along with down pillows and comforters, personal videos, plenty of gadget plugs and more bells and whistles that the average person (that would be me; possibly not you) can figure out how to use during the course of their eight hour flight.  Checking everything out, we were easily amused, but have I mentioned we’d had a few drinks up to this point in the day?  And then, oh boy, here comes the complimentary pre-flight champagne again.  “Why yes, thank you!”

Needless to say, we really, really enjoyed this flight, and Delta gets a big thumbs up for all the little touches that make such a difference on this type of journey.  If you’ve ever had the opportunity to fly Business Elite yourself you know what I’m talking about.  If not, let’s just say I’m pretty sure no one sitting ‘behind us’ was getting hot scented washcloths after take-off followed by a cup of warm nuts with cocktail #1, which preceded our multiple page printed menu presenting plenty of choices along with a lovely selection of appetizers, entrees, desserts, wines, and so on.  Can’t speak for anyone else, but by the time our dinner service was ended, we were beyond comfortable and ready to settle in for that long over-the-ocean nap.  Oh yes, I should also add that the compression socks did make an appearance right after take- off, and somehow we both managed to get them on without causing an embarrassingly hysterical scene, so apparently our comical ‘sock drill’ on the prior day had paid off.  And since this is true confessions, yes, I’m glad I wore them. Just sayin’.

Sleeping Beauty enjoys the cozy-comfy flat bed and down comforter provided on this flight.  Sure hope I wasn’t snoring.

Awaking to the welcome smell of fresh coffee being brewed and a basket of warm pastries set on the linen draped table in front of me is something I would like to replicate every morning of my life. Unfortunately, this only happens during my fantasy life, which is what I was seriously living the morning of Friday, June 14 as we began our approach into London Heathrow Airport.  Refreshed and full (did I really have two desserts after dinner, and how much did I drink yesterday?), we were ready to start phase I of our travel adventure.

Next up:  Talley-ho and off to London we go!