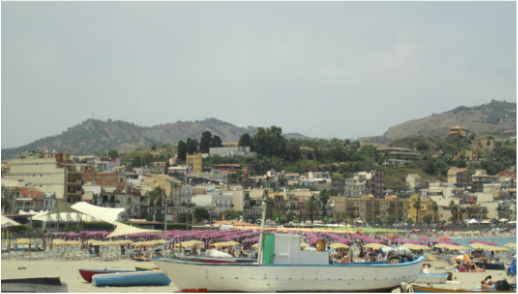 Even though we were first-timers to Greece, I can’t really say that there were any surprises on this stop. It looked like all the pictures we had ever seen of any one of the Greek Islands, only much, much more spectacular.  Turquoise waters splashing up against rocky coves, brilliantly colored bougainvillea cascading down rugged cliffs, charming white cottages surrounded by scarlet roses, and fascinating Byzantine churches seemingly dotting every corner.  It couldn’t have been more beautiful and, well, Greek!  Falling on our seventh day of cruising, this was another stunning version of Mediterranean wonder for us to explore for a few short hours; and, rather than spend the time trying to grasp complicated Greek myths and Orthodox mysteries while tromping around with a historical docent, we chose the excursion that included drinking, folk dancing, and fun.  Yep. I was not about to visit Greece and not be able to shout, OOPA!, at least once while throwing back an ouzo.  Let the games begin! 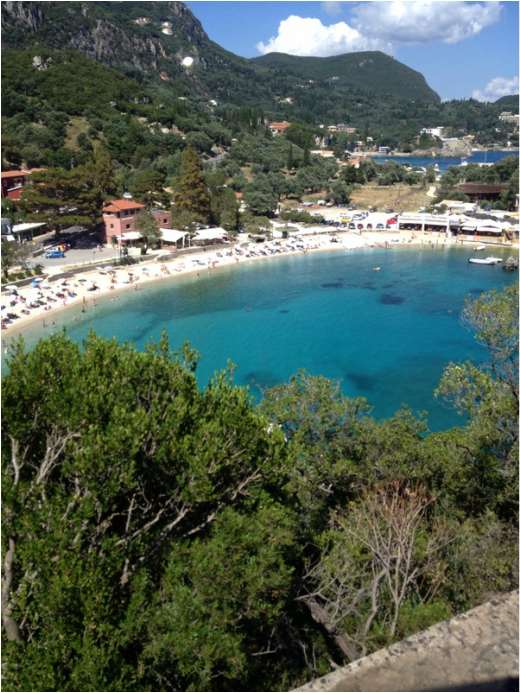 Once we were docked at the port and formally cleared customs, we had a short walk to meet up with Helen, our gentle Greek guide who wore the sweetest smile and was an island native.  Like most European guides, she was highly educated, but unlike others (who don’t know when to lay off on the recitation of historical data and provide the Cliff notes version), she was adept at reading her group of travelers.  Obviously since we were among the cruisers who were in search of fun, Helen and our bus driver made sure to deliver on that promise even though we did hear, and even learn a little, about Greek mythology along the way.

But first we were treated to a comfortable, panoramic trip for about 45 minutes while our bus was chugging and churning up mountainsides and around curved switchbacks.  That delivered us to our first stop which was a centuries old but still thriving monastery, giving us just enough of a glimpse and historical perspective to fulfill that feeling of “Hey, we’re in Greece, so we really need to learn something about ancient times, right?” so that we could then continue on to the really fun part.   It also gave us a hoped-for opportunity to light a memory candle in an incredibly ornate golden chapel which we dedicated to our recently deceased dear Greek friend, Marina, a truly joyful soul who was an embodiment of the spirit of beautiful, lively Greeks everywhere.  She often spoke to us about her time and family in Greece, so I know she was smiling down during our visit to her homeland and urging us to push on to the dance floor that she loved as much as us! 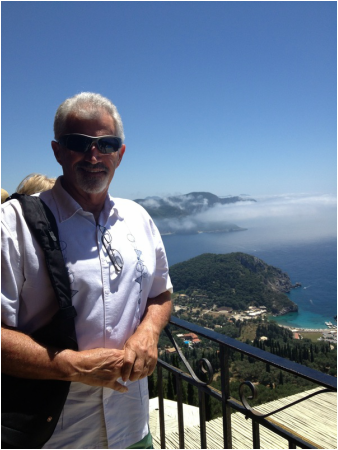 So off we continued to our final stop on this mini tour of Corfu, landing us at the village of Lakones which is planted firmly on top of the island and in the clouds.  I’m not kidding, and we have photo evidence with cloud cover ‘below’ us to prove it.  The views were remarkable, spectacular – have I used those adjectives before?  Well, this time I really, really mean it!  The locals called this spot which overlooks the Bay of Paleokastritsa, God’s Balcony, and it was clear to us why.  The panoramas and vistas were breathtaking, so this could only be topped by breaking out the Ouzo, which most certainly does take your breath away!  If you’re not familiar with it let me explain:  this is an anise flavored aperitif, and is best drunk in moderation, unless of course getting hammered really quickly is what you’re after.  Then, by all means, have at it and enjoy the ride because you will most definitely be on a good one if you consume much of this potent native spirit.  It’s not for the faint of heart, but when one is traveling and riding the wave of ‘live in the moment,’ then I say oopa to ouzo!

And just like that the folk dancers appeared, so husband and I were happy to be the first on the dance floor to join in on the ‘hasapiko’, which is the traditional Greek line dance that many people simply refer to as ‘Zorba’ style.  (Editor’s Note:  I don’t think that’s technically correct, but when the ouzo is flowing. . .).  Well, what else can I say but. . .It. Was. Fun.  And while neither husband nor I were dipping as low as our partners on the dance floor (do they even have knees?) we did manage to follow the line leader and swing and slap and dip (partially) and live in our own version of a Zorba-the-Greek moment.  It was short lived, but memories and photos last forever.  (Regrettably, no one snatched a video so ‘note to self’ about future once-in-a-lifetime opportunities.  Or not, because maybe that whole video thing is over-rated anyway? Seriously, how many friends want to see those things?)

While dancing and drinking we were also served ‘mezes’, which is the Greek version of an antipasto plate, and all I could think of was why don’t I do this at home?  It was amazing to us how much we could enjoy and savor a simple, salad-size plate of white beans, fresh from the garden tomato cuts, stuffed grape leaves, a few slices of ‘mystery cold cuts’ (I didn’t ask, but I did swallow more ouzo to wash it down. . .), a chunky slice of farm bread with feta cheese, and of course a sprinkling of those magnificent olives.  All drizzled in melt-in-your-mouth fresh pressed olive oil.  Oh, and did I already mention the ouzo? Yes, more please (she says with the understanding that headaches will be dealt with later. . .)

Back on the ship, I believe this was the night that we had some yummy fresh lobster for dinner followed by another fabulous night of entertainment and dancing.  First it was a Cirque-type show centered on the Bollywood theme, and husband wisely succeeded in refraining me from joining in on that one.  I must have felt emboldened having done ‘the Zorba’ earlier in the day, but really good thing I thought twice about the attempt at Bollywood dancing and left it to the professionals on stage.  Still, that Bombay drumbeat was so enticing!  We followed that show extravaganza up in the Horizon Lounge where the featured act was performing a tribute to Frank Sinatra and Michael Bublé, and you guessed it, plenty of our kind of dance music to close out the night on another dance floor.

So, even though we didn’t get to Athens or Santorini or Mykonos, we got to Greece.  And our little exploration of Corfu was just enough to leave us smiling, and dancing, and dreaming of a return visit.  As we left port, I was silently toasting to Poseidon, Greek God of the seas, who I felt surely had heard our request for a return future visit and was giving me a positive wink.