“If you read a lot, nothing is as great as you’ve imagined.
Venice is — Venice is better.”   [Fran Lebowitz]

I totally agree.  And judging by the passenger comments we overheard from all those who were gathered on the upper deck as our ship cruised into port this morning, so does everyone else.

“It’s absolutely our favorite place on the planet!”

And then the quote that kept popping into my mind was borrowed from the Stein Mart advertisement that proclaims, “Once you go you get it!”  Yes, we’d been there once before, but had always, always dreamed and discussed going back.  It’s that great, at least for us.  It’s captivating for so many reasons and I’ll try to explain just a few, but first, a bit about our arrival 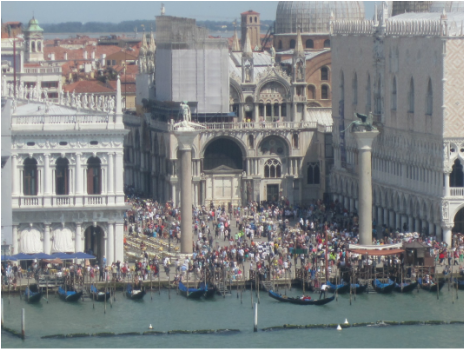 As you know, Venice is all about the water, so when an ocean going cruise ship enters port it’s not exactly news worthy unless you happen to be on board said cruise vessel.  Then, the story needs to be captured in photos and told to everyone who will listen.  It.  Is.  Gorgeous.  And also worthy of a ‘we have arrived’ party on the top deck complete with Bellini’s (more on those yummy drinks later) that you casually sip as you chat with the ship’s officers while gliding by the amazing sights and sounds that entice you to explore once you disembark. In fact, we saw more people at this ‘welcome to the port of Venice party’ than we had seen the entire cruise thus far; so apparently everyone who had previously been privately enjoying the arrivals and departures of The Mariner of the Seas from the privacy of their own balcony suites had decided that the arrival into the Port of Venice was worthy of this level of respect.  Or maybe it was the offer of Bellinis?  Anyway, everyone was on the upper deck moving from side to side every time another quaint canal was spotted or majestic cathedral was recognized.  And in case I haven’t mentioned this before, most passengers on board this cruise are fairly well traveled, but still the sirens of Venice called them out.  It’s said this is one of the most picturesque journeys of the world and I wouldn’t disagree.

The entire vicinity of Venice encompasses over 115 islands separated by more than 150 canals which, in turn, are spanned by some 400 bridges.  But the Venice proper, so to speak, is where most visitors start the exploration.  This was about a 15 minute water transport from our cruise terminal, and then you continue on wherever you’re headed for further exploration either on foot or by water taxi, water ‘busses’, or of course, the iconic gondola.  Husband and I were making this special day, which incidentally was our last for this cruise, a leisurely one and opted for a very brief historical walk-around guided tour that would leave us in the heart of Venice at San Marco Piazza where we would be on our own.  We wanted the little guided part just to make sure we got our bearings as it’s ever so easy to get lost in this maize of bridges, canals, and walkways.  And once we hit our target there was only one thing on our must do list – find an outdoor caffé and sit a spell so we could just ingest the scenery, one precious, delicious, glorious Italian breath at a time.  Yes, we joined throngs of other tourists that opted to savor the Venetian moments dining al fresco at Caffe’ Lavena in the heart of the breathtaking Piazza San Marco.  Ah, si’, I believe this is what the Italians call La dolce vita!  And sitting in the glorious sunshine, sipping my expresso and nibbling the piccolo biscotto watching the wondrous international parade of visitors and pigeons flow by (well, I’m sure most of the pigeons were Italian, but who knows?  Maybe they traveled long distances just to explore this place, too!) I’d have to agree, this truly was the sweet life!

But then again, our entire cruise had been nothing but the same.  To date, we’d had zero complaints, not counting the terrible internet access, but even that was a ‘neh’ in the big scheme of things.  (And, just to clarify, mostly it was husband needing to check on the baseball scores because for me, once I left home base it more like, ‘Business?  What business? Kids?  Home? Dog? Never heard of them!’)  Our instructions to family and friends had clearly been, “We’re gone.  Deal with it.”  Now, on day fifteen, it was clearer than ever that, in the words of St. Augustine, “The world is a book and those who do not travel read only one page.”  To that I might add that if you only read the one page that involved la dolce vita while sipping your beverage of choice in an outdoor caffe’  in Piazza San Marco then you might just be excused for not reading any further.  Just saying. 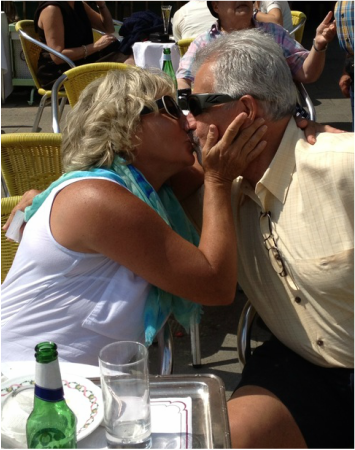 Now, about that adult beverage of Venezian choice, Bellini’s are certainly one of the loveliest ways to enjoy Italian anything.  If you’re not familiar with them, it’s basically a glass of Prosecco (a sparkling Italian wine) mixed with a peach pureé and served straight up (meaning no ice) in a champagne glass.  This cocktail originated in Venice at Harry’s Bar, which by itself ranked very high on my bucket list until I was finally able to mark that box, “Been there.  Drank that.  Loved it.”  And by the way, that happened on my first visit to Venice a few years prior, not on this one because we just couldn’t move ourselves from the Piazza at this moment in time.  So yes, I guess you could say I joined the ranks of Ernest Hemingway, Sinclair Lewis and Orson Wells in loving both the Bellini and Harry’s Bar in Venice.  And for the record, you can certainly drink a Bellini in many other locations, but when in Venice. . .

When our sacred time in the Piazza came to an end, sigh, we returned to the ship to begin the departure process, that being the packing, sorting, repacking of our entire three-week wardrobe and the few travel treasures we had managed to acquire on this journey. We had wisely chosen to save our gondola ride for the evening when we felt the romance and charm of the canals could best be enjoyed, and that promise did not disappoint.  Yes, it’s touristy but hey, we are what we are.  And anyone who thinks they’re above not taking a gondola when in Venice is most likely the same person who thinks Venice is over rated.  It’s not.  As mentioned in that opening quote, seeing Venice in person far surpasses your best effort at imagining what it is via the picture books.

And even though we were disembarking early in the morning, there was no question that husband and I would be wining, dining, and dancing one last time until the ship’s nightlife was lights out.  After all, we take our la dolce vita quite seriously!