. . .and taxis, bikes, shuttles busses, and limos, too.  This is the end of the never-ending cruise story series!  But, before I get to the wrap up, I do want to thank everyone who has been reading these blog posts and taking the journey with us.  For sure it was a memorable and fun trip, and the stories were just as much fun for me to write and share.  Rest assured I have plenty more travel adventures to write about so stay tuned for more travel fun in future posts.

But for now I wanted to provide a little summary of all the modes of transportation we took throughout the entire journey of that memorable Mediterranean cruise because, well, inquiring minds wanted to know?  (Thanks, sis, for asking. . .)  Plus, I just think it’s interesting when you’re on a vacation or travel journey of any sorts to keep track of all the moving parts, and boy did we have plenty on that trip! 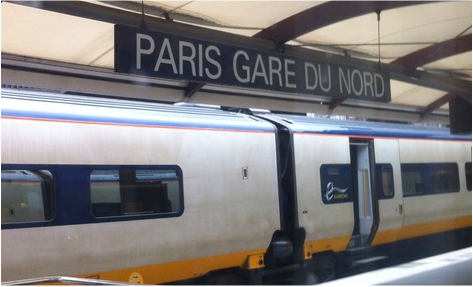 Here’s a brief summary in numbers:

And, just for fun, here are some other stats:

Okay, enough with the stats.  If you’ve followed along with even half of these daily stories you already know we had a wonderful time.  What you don’t yet know is about our grand ending, err, should I say, ‘not so grand’.

You see, on the final day we flew out of Marco Polo International Airport in Venice saying arrivederci to both fabulous Venezia and the end of our most spectacular cruise vacation ever.  But when we landed in Philadelphia we were very quickly jolted out of that dreamy vacation travel mode and back into reality because once we had cleared customs with our luggage we were greeted at the main terminal with one flight delay after another trying to get out of Philley.  Bad weather had set in, and as we heard rain pelting down outside and huge claps of thunder it suddenly went from bad to worse before we finally heard the ultimate announcement:  “ladies and gentlemen, the Philadelphia Airport is now closing and there will be no further flights leaving tonight..  Please exit the building quickly, and you will be notified when flights have resumed.”

Okay then –  welcome back to the USA!

Talk about a crash landing!  We had gone from living the good life on a luxury cruise ship in the Mediterranean to being kicked out of the Philadelphia airport, with no place to go!  Being road warriors, we quickly divided and conquered with both of us attempting to make phone calls via our respective frequent traveler status accounts only to discover that literally there was ‘no room at the inn.’  At least not the Hilton, Marriott, Sheraton, or any other hotel we were able to get connected to.  Except for, are you ready for this?  One lonely (and I’m using that term quite affectionately) Holiday Inn that told us, and I quote:  “We’ve got one room left so get here fast!”

We made a mad scramble to baggage claim (once we cleared customs on the inbound we had immediately checked our baggage for the expected outbound trip back to Orlando which, by the way, should have taken place hours ago already) only to discover that it was buttoned up tighter than a prison cell.  Further, we were told that our luggage was all securely locked up and we could reclaim once again after the airport had reopened.

Again with the okay then!

We waited for the Holiday Inn courtesy shuttle to pick us up while watching thousands of other stranded travelers grabbing every last taxi and bottle of water they could confiscate before going who-knows-where to hunker down during this incredible summer storm.  Further, when we finally checked in at said hotel we felt fortunate indeed to be getting the very last room at the inn that night, and we know that because several in line behind us were turned away.  To where we don’t know, but we did know that we could at least have a clean bed to sleep on, albeit next door to a jiving nightclub that was not at all concerned about the storm that was now pummeling outside, nor about the guests that wanted to sleep in the hotel next to their club.  Oh well.

In the end, the storm passed at some point during the night and we were able to sleep a little, get somewhat put together (same clothes, day two), and have a little hotel lobby breakfast before heading back to the airport for take two of attempting to get home again.  Before leaving, we felt obligated to take one last photo ‘just for fun’ of me in front of our  last night of ‘luxury’ accommodations that would provide our final fun memory of this trip that was already full of them.  Here’s that shot, and yes, that’s me holding a plastic cup of water, in homage to all the other nights where we had wined and dined with good silver and china:

So, that was our spectacular ending!  As the saying goes, “‘we sure ended with a bang!” But it was the sum total of that anniversary celebration that we remember beyond the detours.

I’m leaving you with a few final miscellaneous photos from different stops on the journey and the hope that you’ve enjoyed traveling with us! Thanks for reading and ciao for now! 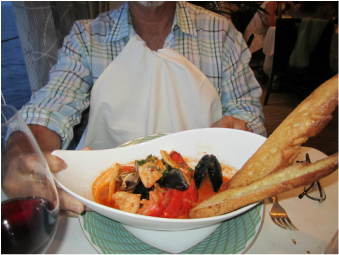 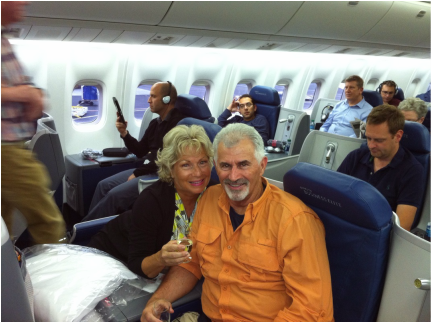