On a recent business trip to New Orleans I heard something shocking, and I’m quoting it here verbatim:  “New Orleans is the #1 tourist destination in the world now!”

Huh?  Pretty sure that would be news to our Orlando CVB, who’ve spent the last year playing host to a record 55 million visitors, +- a few thousand or so, giving us the ‘official’ bragging rights. But as I wasn’t there to start a rumble about tourism head counts (that’s what we pay those CVB executives good money for), I just let that announcement sink into the bayou and moved on to more important things, like how much longer it would take me to get to Café du Monde so I could taste those sweet beignets again. www.cafedumonde.com

Truth be told I must admit, that was my primary goal for going to New Orleans on this trip.  My ‘front story’ was that I had to attend a convention, actually a Conclave (which is a fancy name for a meeting) for people like myself who plan meetings and events.  But in all actuality, I didn’t really need to go to that meeting.  I wanted to go, specifically so I could see how NOLA was fairing post Katrina and, well, get me some real beignets!  And that, I gladly did on day two of my short visit.

Beignet Bingo!
Beyond the yummy piles of powdered-sugar-coated-fried-dough (no wonder they call them by their French name) I did enjoy this little visit.  Mostly because it reminded me of how much I do love that charming city.  And no one expressed that je ne sais quoi better than our closing keynote speakers, James Carville and Mary Matalin, aka Mr. & Mrs. NOLA Hospitality.  Yes, that political power couple of Bush/Clinton era fame who appear to be happily resettled in their hometown having left the hustle and bustle of Washington, DC. And although  their opposing political views appear at times to still have them on a collision course, they sure do know how to turn on the charm together and sell the heck out of their city.  So yes, they were the ones to make the claim about New Orleans being the #1 tourist destination, but what else would you expect from two people who successfully chaired the recent Super Bowl committee that effectively announced to the world (post-Katrina) that New Orleans was back in business? 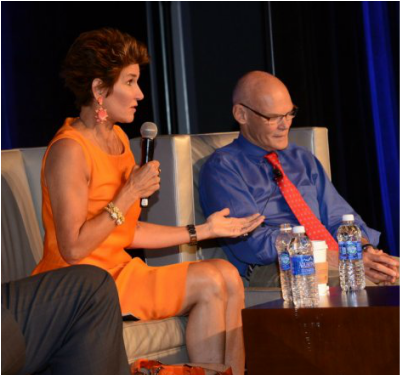 Mary Matalin and James Carville, aka Mr. & Mrs. NOLA Hospitality
So aside from those awesome beignets (ahem), I left NOLA with a feeling that was best summed up by something else James said during his talk.  When referring to the devastation that had overcome New Orleans after the hurricane and the fact that the city had been able to rise again at long last, he used a political metaphor: “If you eliminate the impossible (Obama, an African American with a Muslim name, being elected US President) you’re left with the improbable.”  With that kind of a mindset, it’s no wonder residents of New Orleans really believe in their city, and who are we to argue any differently?  After all, there’s plenty of hospitality and tourism to go around no matter where you live.  But in the end, let’s face it, folks, there really and truly only can be one Orlando, right?