This picture of the Vatican was NOT taken on this trip because, well, remember when I told you we are sight-skippers? Yes we are, and yes, we did.

Big decision for us today, and the contemplation actually had begun several days earlier.  You see on a cruise, one has to make timely choices about excursions when you’re in port so that you can be assured of getting the ones you want.  In our case with this particular all-inclusive cruise, we had tons of activities to choose from in each location, and we actually had started the selection process months ago while still back home in Orlando.

If you’ve not been through this process before you might think it strange for me to say this was work!  But, believe me when I tell you your choice of daily expeditions can make or break your trip.  So we took the task seriously (‘seriously’ meaning usually while we had a glass of wine in hand and were “wine-ing” down another work week. . .just saying) and made some judicious choices, trying never to pick more than one or two at a sitting – not because we were running out of wine, but because there was so much reading to do about all the options; and wrapping your head around all that much fun to look forward to on an upcoming vacation is just plain exhausting! Somehow we stayed the course and accomplished the task, submitting our selections one port at a time, and then being surprised when we were told several times, “This excursion is completely booked.  As a back- up, please choose another while you remain waitlisted for your first choice.”

At this point we were still months away from departure!  Seriously?  All the other passengers have been better planners than us??? Though in the end we got almost all of our first choices, and honestly, even our alternate plans were still great side trips, so no complaints at all about this process except to say ‘lesson learned.’  (And, have I mentioned that I plan meetings and events for a living?  Never thought one had to put this much time and effort into vacation planning, but since most of my travels are based on business, even for me this was a different kind of travel planning.)

Back to the decision on Rome, the big discussion was this:  we’ve been there several times and Love. It. But, how best to spend just one day?  Especially when taking the following factors into consideration:  It’s June meaning hot, and also that travel crowds are starting to peak in one of Europe’s most popular capital cities.  Also in the forefront was the newly elected Pope Francis, wildly popular, and so far showing no signs of leaving Rome for the summer as many of his predecessors did when they’d move to their country residence for a few months, which meant even larger crowds at the Vatican, a place we both wanted to revisit.  Another concern was, well gosh, we were tired already having been on the travel road a total of nine days.  Granted, it was nine days of non- stop fun and adventure, but as all travelers know there is a point of saturation where one cannot fathom entering another ancient cathedral/museum/tourist attraction without running the risk of, to put it bluntly, historical overload?  Yikes, did I just say that?  About Rome?

As a reminder, I believe earlier in these stories I established that we are card-carrying sight-skippers, so when you factor in the crowds, heat, and all of the above mentioned givens, the excursion we finally opted for today involved R & R on the ship.  That’s right.  We chose the luxury of staying on board and just enjoying the cruise life.  And guess what?  We had not one regret about it at all.  Especially when, later that night, we socialized with others who had made the one hour trek – both ways – into Rome and regretted doing so.  Why?  “It was bloody crowded!” and, “Lord, it was sizzling hot!” were oft repeated by everyone we came across.  I rest my case.

No hot train ride into Rome or historical overload for us today. Do we look too worried about that?

So, you might be wondering what we did do on this fine day in the port of Rome, aka Civitavecchia?  For starters, we slept in.  Ahhhh.  After a leisurely breakfast served al fresco on our own cabin’s patio (yeah, we do know how to relax in style, okay?) we both had massage appointments in the spa. . .preceded by time spent in the steam room and sauna, and also a yoga class. (PS – Note to Self:  attend more of these.  Adorable instructor, Evan from South Africa, makes stretching your body like a pretzel so much more tolerable.  Perhaps that’s why the room was filled with ladies?)

After recovering from those ‘exhaustive’ activities. . .we moved on to a brisk walk about the ship, swimming in the salt water pool, sunning on the deck and anything else that came close to total relaxation such as indulging in a few adult beverages poolside in the early afternoon followed by a proper tea service later.  Or was it the other way around?  Who could remember?  The activities that we intended to enjoy – but didn’t get to – were paddle tennis on the top deck, bocce ball, and golf putting.  So many amusements; so little time and energy!  We had to choose wisely, and that we did.

Believe it or not, the topper of activities for my afternoon was actually doing a load of laundry in the complimentary shipboard guest facility.  I hadn’t anticipated doing this but it turned into a memorable experience simply from the other chatty travelers I met while doing the task, one of which had been doing a daily load of laundry since their luggage had still not found its way on board from their departure city of Chicago!  Another ‘laundry acquaintance’ was a gorgeous younger woman from Singapore who was, and I’m not kidding here, ironing her husband’s underwear.

“Don’t you do this, too?” she asked when I looked at her with a puzzled expression.

And believe it or not, there were actually instructions on the wall about how to use the iron that was conveniently provided in the laundry room.  Or, in my case, you could just learn by watching an expert from Singapore.  But trust me, I wasn’t about to iron husband’s undies.  This was when all that darn linen made a cameo appearance again!

So how do you top a day full of relaxation?  By indulging in yet another gourmet meal followed by enjoying a great live performance of a swing band and full complement of show dancers, and then heading into our favorite nightclub for more dancing.  Except this night our feet – all rested and pampered –  were in mint condition.  We did notice it was a bit quieter in the after dinner clubs tonight, probably due to all the excursion goers who were completely exhausted from their long hot day spent in Rome.  And to think we had actually contemplated going into the city just to get another gelato from one of our favorite locations by the Trevi Fountain!

A smart and peaceful decision by Team Lombardo. 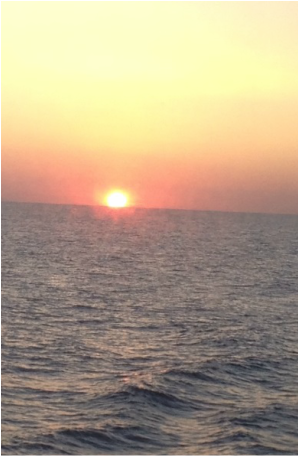 Another gorgeous Mediterranean sunset ending another perfect day at sea.