With our cruise ship anchored in Portofino Bay, we took our breakfast dining al fresco alongside the incredibly alluring panorama of coastal scenery, and I simply couldn’t get Andre Bocelli off my mind.  You see, back at home just a few short months earlier I had watched his newly released PBS special that had been filmed on this very beach, which is one of the most picturesque European waterfront settings I have ever laid eyes on.  So today I was here calmly sipping an espresso and trying my hardest to place some of the songs he sang during that concert to the actual village scenery that was now only a short tender ride away from where I sat.  (I was also trying to stay composed and not act like the giddy American tourist that I’m sure I was – especially after requesting ketchup for my eggs –  but hey, we are what we are, right?).

Ah-huh, this is the real deal.

So, of the six complimentary excursions that were offered this day, can you guess which one we chose?  Why, a boat tour of the Riviera!  Since we had arrived by boat, err, cruise ship I know that might sound odd to some, but seriously, how can you not love cruising the coastline of the Italian Riviera via a zippy motorboat?  And to top that off, in order to get to ‘zippy’, we left our ship via the convenient tenders that were running back and forth between the Mariner of the Seas and the yacht harbor at Portofino.  Yes, today we were definitely getting a seafarer’s perspective of how ‘the other half’ lives on this world famous coastline.  We passed sprawling cliff-side villas belonging to the likes of Dolce and Gabbana as well as quaint historical villages oozing with charm, some only accessible by foot or boat. (Yes, you read that correctly.  Amazingly, some exist just fine in these rural Italian communities with no motor vehicles.  Go Figure.) And as we sped along on the open air top deck of our motorboat it seemed as though there would be no bad angle for the photographic memories we were snapping of the cliffs, bays and inlets along this journey.

Notice whose hair is flying in the wind and whose doesn’t move?
We stopped at a small fishing village called Camogli that consisted of typical brightly painted houses (that just make you want to smile) and an adorable seaside promenade which we explored via a guided tour with a delightful native.  Miriam had been born and raised in this very village so she definitely knew the ins, outs, and fascinating details of every cobblestone street and resident vendor in the historic center of Camogli.  Then we were given some leisure time in which we wisely chose to do what just comes naturally when visiting the Italian Riviera – eat, drink and people watch.  Planting ourselves at a rustic beachside patio, we enjoyed the first of many insalata Caprices that we would be indulging in on this trip followed by a giant bowl of incredibly fresh pasta.  And then just a small stroll away we topped our luncheon off with what we’ll refer to as ‘gelato #1’, which sort of lead the way to what became a daily obsession for us on this trip. (Speaking honestly, any trip we’ve ever made in the past and will make in the future to Italy, too).  Yes, we were already hooked on that refreshingly cool and sweet-tooth-satisfying standard Italian treat, and if you’ve been to Italy you know I speak the truth when I say they just don’t make gelato as good as this stuff anywhere else on the planet.  Period. 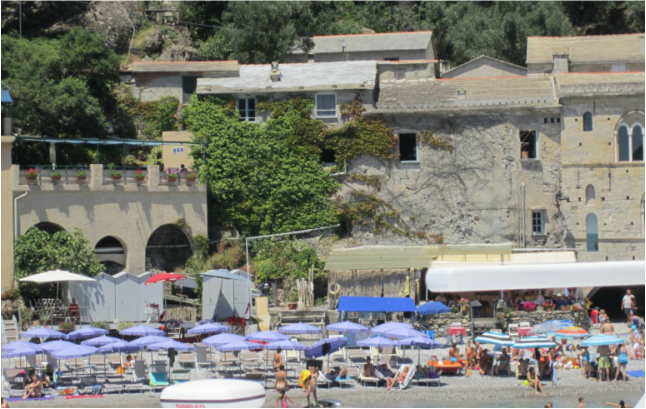 And, here’s an interesting little story about a great memory from that day.  While walking off what we hoped were at least a few of those pasta and gelato calories (wishful thinking on our part), we came across a you-had-to-be-there-in-the-moment scene.  Up until now, we had encountered zero cars on these historic cobblestone streets, but all of a sudden a typical old vintage coup of some make quickly appeared from nowhere out of a tiny side street, parking right in front of us as we had now perched our gelato-induced-coma selves on a harbor side bench.  A man dressed in his Sunday best suit jumps out of the driver’s side and proceeds to open the passenger door from which a very ancient typical Italian ‘Nonna’ gradually appears dressed in black from head to toe.  If she had been able to straighten up I doubt she would reach 4’10”, and we watched, for quite some time, as the very proper and polite gentleman provided escort and support for her while she ever so slowly made the decent up the wobbly brick path leading to the base of a hefty amount of steps leading up to a magnificent 12th century, Baroque style Catholic church, which up until now had only a few tourists meandering in and out.

But by the time grandma made it to the base of that steep climb, there arrived on the scene another larger vehicle parking next to the first, and the formally dressed men that disembarked this one were carrying several large sprays of beautiful floral arrangements.  As the church bells began to toll, my immediate thoughts went to a beautifully romantic and intimate wedding scene that Nonna was determined to attend, but where was the bride and groom?  Within minutes of the bells ringing, other villagers, also dressed in their Sunday finest, appeared from every nook and cranny up and down the dockside promenade until finally the arrival of a funeral hearse.  And yes, it took quite a team of strong men to carry that casket up the enormous and steep stairway leading into the church in which Nonna herself had finally arrived where she was met and compassionately greeted by the presiding priest.

Unfortunately at this point we had to walk back to the dock and re-board our water vessel which would take us back to a port to get on a tender to get us back to our cruise ship. Whew!  Yes, it was time to repeat the earlier exercise of boat transfers for this day’s excursion, only this time in reverse.  And although we never did get any more details about that touching funeral scene, I imagined a traditional, old world Italian Catholic service in which a timeworn woman was paying last respects to her beloved spouse, or perhaps a lifelong friend.  At least that’s the story that I’m going with.

Back on board our luxurious floating heaven, we chose to eat that night in Sette Mari, the onboard version of gourmet Italian enchantment.  Greeted with bubbly white Prosecco, the Italian sparkling wine to which we would become accustomed to most evenings before dinner,  was kind of like hearing the maitre’d say “Welcome, and how nice that you’ve chosen to dine with us this evening!” At least that’s what I heard every time that bottle of happiness was freely offered to us.

Gawd, I love this place!

Starting with the open serve-yourself style spread of incredibly fresh antipasto that on most days would have provided a full meal for us, husband and I then made our menu selections and let the waiters do the rest of the work.  How civil is this?  Grilled lamb chops for me (yes, if you’re keeping track that does make it two nights in a row, but that’s what you can do on an all-inclusive cruise, okay?), and frutti dei mari for husband had us both trying to wipe huge grins off our overfed faces as we soldiered on through every course of this extravaganza.  Really.  Tough.  Life, this cruising business!

You could serve me anything on this beautiful plate and I’m sure it would be delicioso!

We finished in time to see the “Viva la Vida” Broadway staged show complete with a full cast of singers and dancers in the Constellation Theatre.  Lucky for us the waitress was right there to take our drink order as soon as we sat down because at least 10 whole minutes had passed since we had drank the last drop of our wine with dinner.  Mon Dieu!   Being that this show featured Latin songs and dancing, it ended up being one of our favorite productions of the entire cruise and left us in the dance mood as well.  So off we went to do our own Rumbas and Salsas as we closed one of the nightclubs down before finally ‘enough!’ and crawling our way back to cabin #617, our heavenly home while at sea.

“Thank you, Steward Henry, for the wonderful turn down service, and why yes, I believe I will enjoy this special chocolate you left tonight! And I certainly appreciate that you also filled up my ice bucket, too.  You’re the best!” 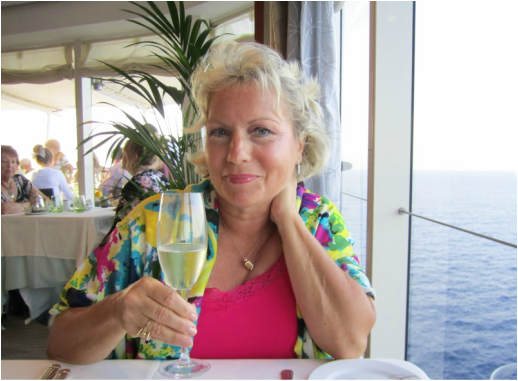 Yes, that’s me with my sunburned happy face during dinner at Sette Mari. Portofino does that to you!