I was the last child born into a family of four, so growing up I didn’t have a lot of experience with being the first.  But here are some people that do:

Then there was this guy, Neil Armstrong.  First man to step foot on the moon.

The date was July 20, 1969, and while I’ve forgotten a whole lot of things from my youth, some memories live on forever.  That was one, and as we get ready to celebrate the 50th anniversary of that historic event in human history, I can’t help but reflect back on where I was and what I was doing when ‘that thing’ happened.

I remember that it was a very sunny Sunday, and in what was typical for my family at the time, we were out on a weekend boating excursion.  Lake Michigan was showing off incredibly sparkling waters, the likes of which just made you happy to be near it.  So, once we all hopped on board and went through Daddy’s normal safety checks (he, being the only man responsible for a boat full of family females) we launched into our own world of boating happiness.  Well, at least most of us.  We were never quite sure about mom, who always seemed a tad reserved in the boat, maybe because she was the official family worrier.  . . 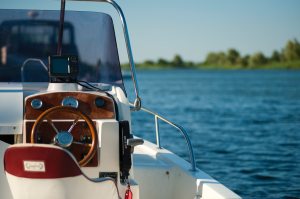 Anyway, it was a typical busy launch pad at our spot and we continued to see plenty of other families that day having fun in the sun just like us with their water skiing, picnics on the sandy beaches, and my personal favorite, riding that tobaggan attached to our boat while daddy opened up to high speed.  My sisters and I could manuever that sled over the high-wake waves and wow, was that ever fun!  In retrospect, I don’t recall ever seeing mother smile at this activity but dad, he was in his most glorious moments while having fun on the water.  But on this particular day there was definitely something in the background of this whole familiar scene as I vaguely remember both mom and dad frequently checking the time to make sure we got home before ‘the event’, and timing had been confirmed with many other boaters we encountered throughout the day.

And when it was finally time to end the family water sports fun, that’s when things got really interesting.  In fact I can actually remember things getting exciting at this point because as we slowed down and entered the canal that would lead us back to where the car and boat trailer were parked there was an enormous amount of people, both standing and sitting, along the sides holding signs saying, “They Landed!”  “We’re on the Moon!” “USA did it!”

People were cheering, clapping, and waving American flags, and I witnessed my dad overwhelmed with joy before reaching to hug my mom.  And then I saw she was crying.  And I was too young to really understand why, although now I can think of a hundred reasons that news brought tears to so many.

After that it was a rush to load the boat back onto the trailer and get home so that we could all watch the news together, gathered around that lone TV in our living room which I think was black and white, but here’s where things get a little fuzzy.  I remember my sisters and I on the floor while mom and dad were on the edge of their seats on the family couch.  I remember Walter Cronkite’s voice doing some commanding yet hesitant narration in between updates from Mission Control.  I remember holding my breath as Neil Armstrong slowly walked down the steps of that lunar module.  Plus I remember that after Neil planted that flag and spoke those momentous words, “One small step. . .” my family celebrated by eating ice cream sandwiches while still watching the TV in our living room.  (What’s that?  Ice cream involved in a family celebration? Go figure.)

So, where were you when Neil Armstrong was walking on the moon?  What were you doing, and how did you celebrate?

I just remember being in awe, maybe for the first time of my young life, because I really felt the enormity of this moment in history along with the pride we all shared in being Americans.  Americans, that could figure out this gigantic Presidential mandated task and come together to make it happen for the good of humankind.

But that was then and this is now.

And although I’ve personally still never been to the moon, I have traveled millions of miles, and sometimes that makes me a better storyteller.  I hope you enjoyed this one.

Now, as a little bonus for any of you that are reading all the way to the end, here’s a  special quote from another astronaut whom I’ve long admired, Colonel Chris Hadfield, the first Canadian to walk in space and live on the International Space Station:

“. . . the reality of my life as an astronaut, which was not all about, or even mostly about, flying around in space. It was really about making the most of my time here on Earth. . . when you’re the author of your own fate, you don’t really want to write a tragedy.”

Yeah, what he said.

If interested, you can read my full book review on Colonel Hadfield’s memoir, An Astronaut’s Guide to Life on Earth, here.